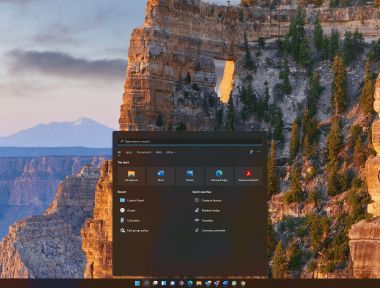 It came as a bit of a shock when Microsoft announced that Windows 10 was going to be their last version of Windows.  Previously Microsoft software, including operating systems, followed a development cycle of 5 years of support which would include feature updates, patches and fixes then 5 years of extended support before going out of support.  Instead Microsoft was going to provide businesses and consumers with an operating system that would instead be developed and patched ad infinitum.

Which is why it might come as a bit of a shock to some that Microsoft will be launching Windows 11 with a release pencilled in towards the end of 2021 and if you are brave and willing to participate in the trial, developer versions available right now.

Windows 11 is built on Windows 10 code, it is reportedly 90% Windows 10 code with approx. 10% new development, which doesn't sound much but when you consider Gorillas share 96% of the same DNA with Humans you can see what a difference a small percentage of change can make.

The first thing that will strike people is the change of the home screen with the start button and pinned applications being centred on the Taskbar which gives it a whiff of MacOS and the Dock, however the clock and Taskbar corner icons and overflow still appear on the right of the Taskbar in its out of the box configuration.

The next thing is that the settings have been simplified to the extent where more advanced features are somewhat hidden, which from an admin point of view means learning a new way to support end users.  In Windows 10 users and administrators were very much encouraged to use Settings to make changes to the OS both basic and advanced but a lot of the advanced settings have been removed so you may find yourself going round in circles looking for advanced ways to configure the OS.  But don't worry, Control Panel is still very much alive and kicking so advanced settings can still be made there.

In another nod towards MacOS is the way that different virtual desktops can be configured and used including having different wallpapers for each virtual desktop, for example you could have a virtual desktop setup for work, one of the kids to do school work and one for hobbies such as content creation.

But it is not just Apple that gets a look in, so does Google, with Windows 11 supporting applications written for Android without the need to use an emulation like Bluestack.  Instead applications can run natively so that it will provide Android users with a more joined up experience like MacOS users experience with iOS devices and the seamless integration in a bid to make life easier for the end user.

Whilst I could write reams about the other features, such as Widgets, integrated Teams, snap layouts and re-docking you can't but help think that Windows 11 is heavily influenced by how Apple has developed MacOS which does feel a little odd, as if things are converging into a world where the operating system is becoming less and less relevant in order to give users a common experience regardless of which vendor is used.